October 08, 2015
"Hello out there, we're on the air, it's Hockey Night tonight.
Tension grows, the whistle blows, and the puck goes down the ice.
The goalie jumps, and the players bump, and the fans all go insane.
Someone roars "Bobby scores!" at the good ole' hockey game."

Canada and hockey go together like bacon and eggs.

Basically, if you live in Canada, you are born loving hockey. Although many play the sport, few are great at it, but that doesn't matter, because we can all appreciate a good ole' hockey game, right? After all, it's the best game you can name.

I've been cheering on the The Ottawa Senators forever, and maybe, just maybe, this will be the year they'll finally take home the Stanley Cup. 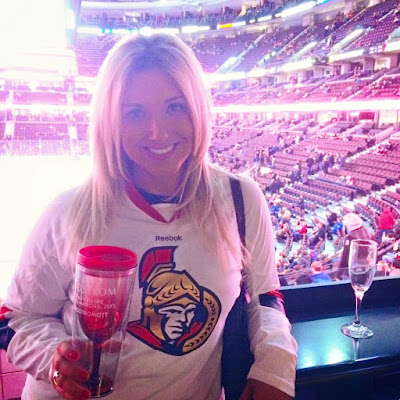 The 2015-2016 season is about to kick-off, and I'm SO excited. Seriously. So pumped. The first home game will be on Sunday, October 11th at the Canadian Tire Centre.

Canadian Tire wants to get hockey fans in the mood for the first game, so starting tomorrow, the Canadian Tire Hockey Truck (see picture below? It's pretty hard to miss!) will be at different locations around the city to get everyone excited for the upcoming hockey season. There will be fun activities for the entire family, so bring the kids, since they'll be off from school. A perfect start to the long weekend! 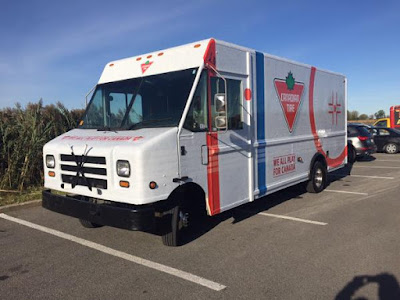 You can take part in games and activities and you'll even get the chance to receive autographs from past and present Ottawa Senators hockey players. Of course, lot of prizes are up for grabs, too.

Here's where you can find the #CTHockeyTruck this long weekend:

Disclaimer: I have received compensation for this post from Canadian Tire and The Ottawa Senators. Views and opinions are my own, and I will still be your friend if you're a Leafs fan.

Alyssa said…
So excited for this hockey season! It's so great what CT and the Sens foundation do for hockey fans across the city! Go Sens Go!!
October 8, 2015 at 3:07 PM

The Complete 2016 Holiday Gift Guide (Plus A Giveaway!)

November 24, 2016
It's the most wonderful time of the year, and yet, it's also the most stressful time of the year for some people. While I love to shop, I know many people don't find pleasure in walking through the mall in December, looking for the perfect gifts to give the people on their list. I've put together a holiday gift guide that'll help narrow down the choices of what to give the people you love this holiday season—from luxurious gifts like a getaway to The Hazelton Hotel to books and skin care products, there is definitely something here for everyone on your list. Luxury gifts The Hazelton Hotel: I love to travel, and I love gifts that have to do with travel. Even if it's a staycation, or a weekend getaway, I can't think of a better gift to give someone you love. I had the pleasure of staying at The Hazelton Hotel in Yorkville, Toronto, and I think this is a perfect gift to give. You can unwind and re-connect in the luxurious rooms and suites, enjoy the
61 comments
Read more

Escape to Chicago: Where to Stay, Dine, and Shop

January 14, 2022
I had the great pleasure of once again joining Choose Chicago on a press trip to experience the vibrant city of Chicago. Chicago was recently voted the Best Big City in America and as usual, Chicago was a dream, and I can't wait to return. (To read more about all the fun things to do in Chicago if you're planning a trip to the Windy City for your next holiday escape, you can read my article in Canadian Geographic Travel ).  Here are a few highlights that'll help you plan your next Chicago trip with ease--how to get there, where to stay, where to dine, and what to do:  Porter Airlines Travelling during the pandemic can be challenging, but my flight with Porter Airlines made the experience smooth, comfortable, and safe. I had all the necessary documents with me (proof of vaccination and rapid test for entry to the USA) and Porter took care of the rest--I was met with excellent service checking in, and in-flight (we loved our flight attendant so much!) along with tasty snack
Post a Comment
Read more

October 14, 2022
Every trip to Toronto is made even more memorable for me when I stay at The Hazelton Hotel, located right in the heart of luxurious Yorkville.  I've had the pleasure of staying at the Hazelton Hotel many times over the last several years, and with each visit, I fall in love with the hotel even more. The Hazelton Hotel is most definitely a perfect escape for a couple looking for a romantic getaway and it's also perfect for a best friends weekend trip, a work retreat, or simply, any visit to Toronto. The Hazelton is "Canada's first and only Forbes five-star independent luxury boutique hotel" and though it's considered a boutique hotel because it only has 77 (very spacious) rooms and suites, it feels very grand and luxurious. The hotel is constantly ranked the #1 hotel in Toronto on TripAdvisor (five years and counting!) and was just voted the N umber Three Best Hotel in Canada  Conde Nast Traveller's 2022 Readers' Choice Awards. I have to agree, becaus
Post a Comment
Read more